10 Fun Facts About the Holidays

The Holiday season is upon us and the big day is just around the corner. To help alleviate some of the stress of your holiday shopping and planning, here are a few fun facts about the holiday season. Throw these out in conversation and you’ll be sounding like a Christmas history pro in no time:

10. According to marketingprofs.com, 28% of all emails in the US are sent during the holidays.

9. In 2015, an estimated 4.2 million dinners worth of food were thrown out after Christmas dinner in the U.K.

8. Denny’s 24-hour restaurants closed for Christmas for the first time in December of 1988, which seemed nice until the employees realized they’d been built without locks.

7. The first artificial Christmas tree was made by the Germans from dyed goose feathers.

6. Disney decorates its 4 theme parks and 24 resorts for the Holidays each year, and it take about 150 semi-trailers loads to do it.

5. The first state to recognize Christmas as an official holiday was Alabama is 1836, and the last was Oklahoma in 1907.

4. The famous St. Nikolas, on whom Santa Claus is based, was born in the area now know as Turkey, and is the patron saint of banking, pawnbroking, pirating, butchery, sailing, thievery, orphans, royalty and New York City.

3. The Christmas classic, “We Wish You a Merry Christmas,” was originally a threat directed by mobs of low-class workers at their masters in the 1500s. They demanded alcohol and treats which was the typical way for adults to celebrate Christmas at the time. 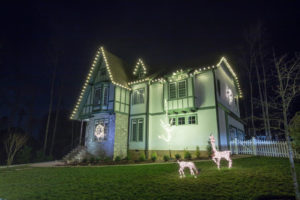 2. It’s a Wonderful Life is many people’s favorite Christmas movie, but did you know that it was originally a flop? It premiered to mixed reviews and was mostly forgotten until a clerical error in 1974 resulted in the copyright not being renewed. Networks aired the film in an attempt to avoid paying royalties (which they still had to pay) and it become a perennial holiday favorite in the 80’s.

1. On the set of Miracle on 34th Street, 8-year-old Natalie Wood was led to believe that Edmund Gwenn was the real Santa Claus and didn’t find out the truth until seeing him at the wrap party, out of costume.